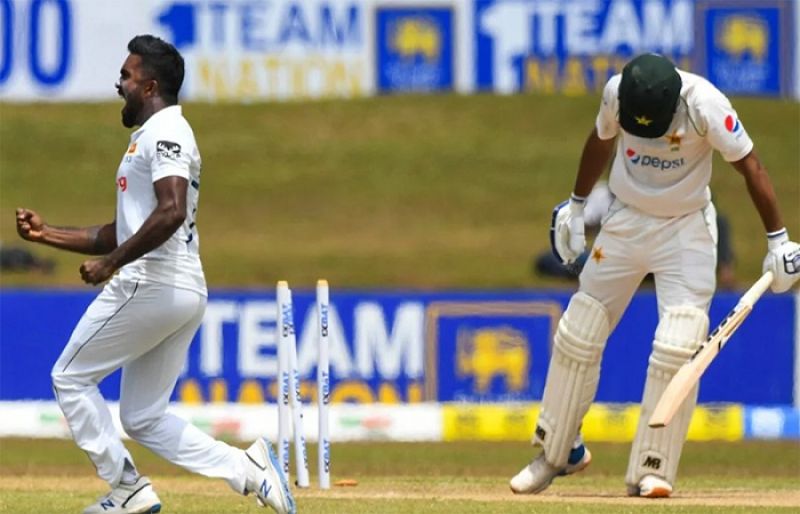 Sri Lanka captain Dimuth Karunaratne batted via ache to assist the hosts stretch their total result in 323 runs and enhance their probabilities of a series-levelling victory within the second check in opposition to Pakistan on Tuesday.

The hosts have been 176-5 when unhealthy gentle stopped play on day three with Karunaratne on 27 and Dhananjaya de Silva on 30.

Having conceded a lead of 147, Pakistan claimed 4 wickets within the second session however the 59-run stand between Karunaratne and de Silva put Sri Lanka in a powerful place.

Earlier, Ramesh Mendis claimed 5-47, his third five-wicket haul in checks, as Sri Lanka bowled out Pakistan for 231 to safe a big lead.

Resuming on 191-7, Yasir Shah and Hasan Ali batted resolutely to disclaim Sri Lanka any breakthrough within the first hour.

Yasir confronted 97 balls for his 26 and was the final man out.

The stop-gap association didn’t actually work and Naseem Shah had Dickwella caught behind for 15.

Yasir struck along with his first ball to dismiss Oshada (19) and was denied a second wicket when Babar Azam dropped a catch, his third spill of the match, to reprieve Kusal Mendis.

Kusal (15) couldn’t capitalise on it, although, and Karunaratne walked out to bat after Angelo Mathews departed for 35.

Pakistan pulled off an exciting 342-run chase within the opening match to seize a 1-Zero lead within the two-test sequence.